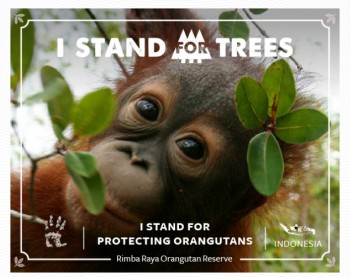 Ceiba Renewables have pledged to donate a modest $10 (£6.40) to Stand For Trees projects for each solar PV system they install. The move is designed to raise awareness about the over-consumption of the world’s natural resources.

Stand For Trees (www.standfortrees.org) are a charity whose mission is to protect endangered forests and reduce the impacts of climate change. They have a large number of projects across the world trying to help some of the most beautiful and nature-rich ecosystems in Asia, South America and Africa.

For example, the Rimba Raya Orangutan Reserve in Indonesia is one of the most highly endangered ecosystems in the world – the High Conservation Value (HCV), lowland peat swamp forest is home to local communities and over 1,000 at-risk plant and animal species including the Borneo orangutan, clouded leopard and Asian sun bear. Every day mining, paper and palm oil interests lay plans to destroy these forests.

Ceiba Renewables’ actions relate to the recent news ( http://www.theguardian.com/environment/2015/aug/12/humans-have-already-used-up-2015s-supply-of-earths-resources-analysis ) that humanity’s consumption of our natural resources is now 1.6 times that of the earth’s ability to replenish itself.  This “ecological deficit” is being witnessed at an ever-alarming rate as witnessed through deforestation, soil erosion, depletion of water resources and the accumulation of greenhouse gases in the atmosphere.

Every certificate purchased goes towards a particular project of the donators choice and Stand For Trees have estimated that each $10 donation will save approximately 1 tonne of carbon.

“As a company and as individuals we at Ceiba Renewables are acutely aware of the long-term legacy that our activities are having on the environment and eco-systems. News stories such as the Guardian’s really hammers home the fact that we need to get away from the corporate model of putting short-term profits over environment, over health, over local communities, etc. According to the World Resources Institute, 80% of the world’s natural forests have been destroyed since the Industrial Revolution and it appears that the rate of destruction is only increasing. While the world’s energy demands is a complex and sometimes thorny issue to discuss, I think one thing everyone can agree on is that there has been more than enough destruction of the world’s ecosystems.

“We found Stand For Trees after watching an online video through Facebook” You can watch the clip here: https://www.youtube.com/watch?v=eRLJscAlk1M

“and we considered a number of similar charities before opting for Stand For Trees”.

“The Stand For Trees certificate is a nice way to start our customer’s off on their solar power experience, so as well as doing a great thing by reducing their own electricity consumption and CO2 emissions, now they’re also having a direct, positive (albeit small) effect on crucial eco systems in vitally important places around the world.”